Separating The Facts From the Fiction

First Off: What are Iron, Steel and Aluminum?

Iron, steel and aluminum are different types of metals from which metal driveway gates are created.

Iron was once widely used in the construction of gates but is rarely used in modern times due to its brittleness and propensity to crack.

Some fence and gate elements such as finials (spears) are still made from iron. Ever see a fence or gate missing many of the ornamental spikes? You can bet they were made from cast iron and were easily snapped off.

Steel is an admixture of iron and carbon which makes the iron less brittle and more workable. Nearly always used in the construction of bridges, automobiles and skyscrapers; steel is perhaps the most integral commodity of the modern era. Widely known for it’s strength and endurance. Cost effective and very strong but 3x heavier than aluminum and more prone to corrosion and oxidation, also known as “rust”. Raw steel has a dull white appearance when fully cleaned. Few modern shops actually work with actual iron and instead use it only as a marketing term while in fact working with steel. 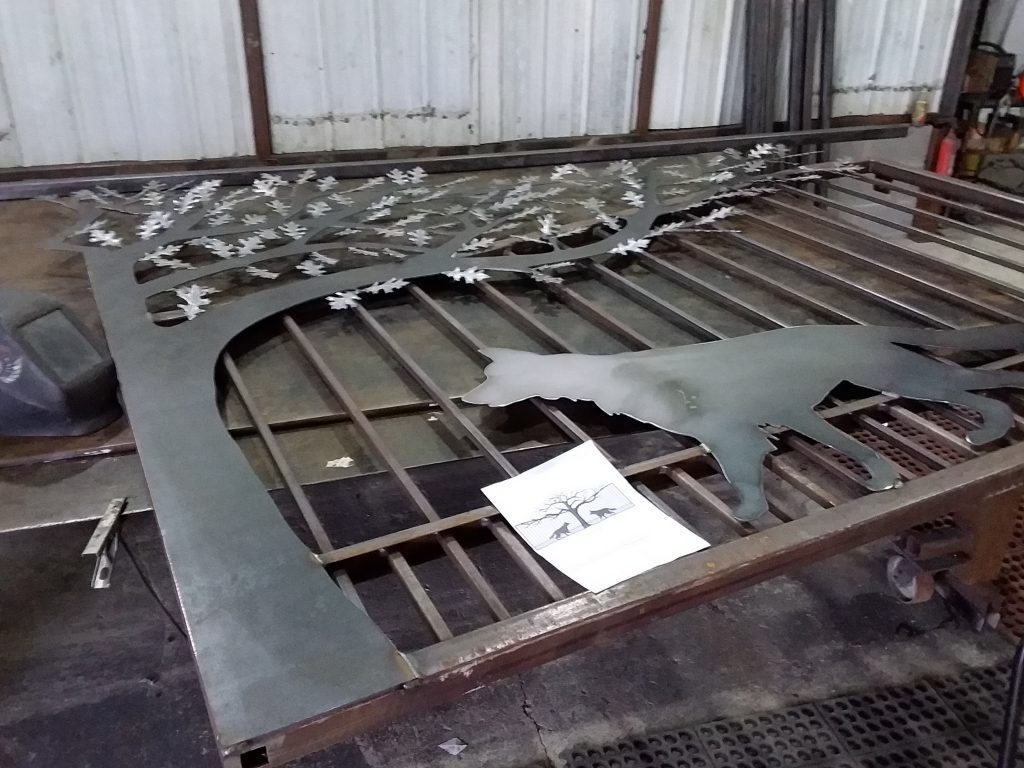 The steel gate shown above is a prime example of how rust blooms begin to form after the material sat on our steel rack for a couple of months waiting to be used. The general brown appearance with orange spots on the pickets and bottom rail is all rust forming, it must be totally removed during the powder coat preparation stage which follows gate fabrication. The dark blue looking steel on the tree and German Shepherd are covered in a layer of oxidation called “mill scale” which forms on the hot steel after it is produced red hot at the steel mill. As it cools at the mill, the steel surface reacts with the oxygen in the air to form oxides and what is essentially a layer of oxides on the cooling metal. This “mill scale” acts as a temporary protective layer keeping away any further corrosion in the short term. It will continue to react with the environment until it eventually degrades into the typical brown and orange rusty look. 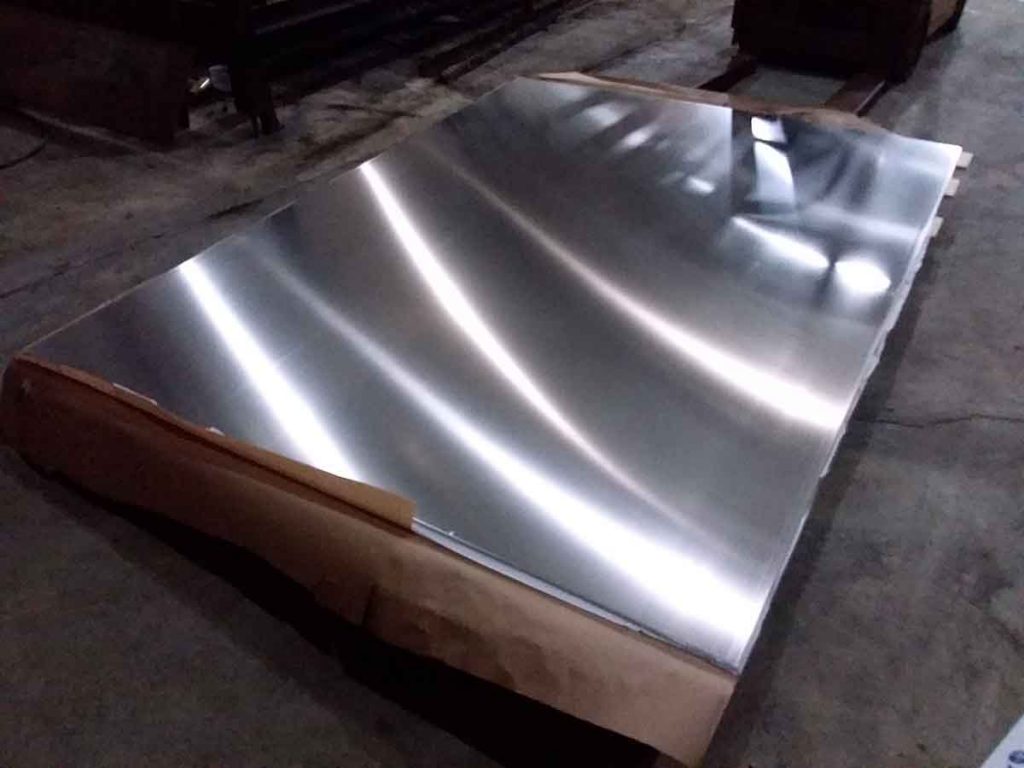 Aluminum is a shiny white metal most commonly used for building aircraft, boats and medical devices. It is softer than steel and requires much greater attention to cleanliness in order to weld properly. With a melting point of only 1100 degrees F vs. 2000+ degrees F for steel, aluminum is much more reactive to heat and likes to “move” i.e. warp if it is not obsessively clamped during fabrication. Many times an aluminum gate can be identified just by the big bow shape across it from where the fabricator was being careless.

Aluminum, just like iron (and steel), is prone to rust and corrosion. Although more costly than steel, It weighs only 1/3 as much and has a very high strength-to-weight ratio which makes less work for both the gate installer and the automatic gate openers. Aluminum’s outstanding corrosion properties are highly desirable for customers living in salty environments such as near the ocean or close to a road that will see lots of salt through the winter. 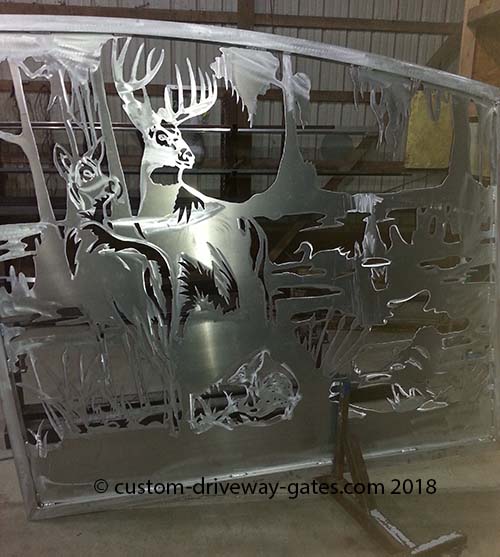 Once the metal surface is cleaned down to its unblemished white appearance, steel and aluminum both need immediate protection from the elements or else they will soon begin to form an ever growing layer of oxidation from exposure to Earth’s harsh and corrosive atmosphere.

When oxidation i.e. corrosion occurs in steel it is called “rust“. Due to its stained orange or brown color, rust stands out on steel like a sore thumb.

In aluminum the layers of oxide which form are called “white rust“. Unlike steel, aluminum corrosion is white and powdery, therefore it can be very hard to notice at first, until suddenly it is noticed everywhere at once.

Installed gates are more or less prone to corrosion depending on the climate and microclimate of the gate installation site. A metal gate at an oceanside villa or very close to a heavily salted winter highway would be much more prone to corrosion than would the same metal gate in a relatively salt-free environment.

The first three stages before painting or powder coating are “prep, prep, prep”. The more time spent preparing the surface, the longer the paint job will last. Nearly all coating failures can be attributed to a failure in surface preparation.

Once the preparation is complete it’s time to protect the fresh metal surface. It is covered with a metal coating, typically either paint or powder coat. Once the gate is coated and exposed to the elements at its installation site then nature begins her testing of the work of the painter or powder coater until sooner or later the coating fails.

Paint is generally the lowest cost, lowest technology coating method. Paints cure by a chemical reaction and most, if not all, suffer from extended cure times, especially for water based paint products. Other paints such as acrylics and enamels cure faster than water based paints but use harmful chemicals such as accelerators and hardeners while still falling short of the hardness of powder coat.

Powder coat is an environmentally friendly method of painting with an electrostatic applicator which uses no water or chemicals but rather a large parts oven to cure the paint after it has been applied. The part is baked at 400 degrees for 10 minutes and is completely cured once it cools down to room temperature. 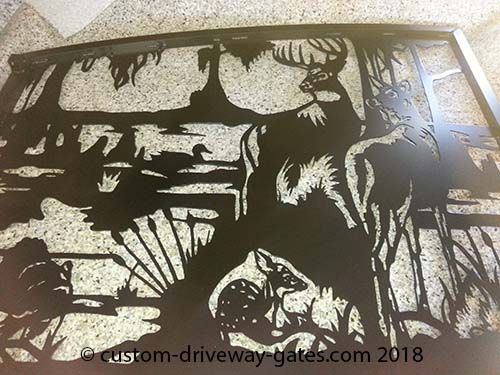 Once the gate has been powder coated it is visually impossible to distinguish whether it is made from aluminum or steel. The difference would not be known until the time for handling and installation of the gates due to the weight difference between steel and aluminum.

A common misconception is that aluminum does not rust. Technically this statement is true because “rust” refers specifically to iron oxide which is created when iron (the main ingredient of steel) is exposed to moisture. While steel corrosion is called “rust” aluminum corrosion is called aluminum oxide or “white rust“.

For our aluminum gate designs use marine grade aluminum materials because they contain magnesium which makes our gates much more resistant to moisture’s corrosive effects than a purer aluminum would.

Despite the differences in corrosion resistance between steel and aluminum; advanced powder coating technology allows us to greatly reduce the likelihood of corrosion on either our steel or aluminum gates.

We use powder coatings which provide the perfect barrier between metal and moisture. Our steel gates all receive a zinc-rich epoxy primer specifically formulated for exterior applications. The primer prevents the spread of rust by creating an impermeable layer of zinc-infused epoxy directly over the steel surface. The top coat (usually black) goes on last and looks nice but the primer is what does the work keeping the steel gate rust-free for a long time.

JDR Metal Art specializes in handcrafting exquisite entry gates for clients from all walks of life. No matter what your needs, we have the perfect solution and enjoy taking on new challenges all the time.

Here is a selection of some of our steel driveway gates.

You can check out some of our aluminum driveway gates here.